There is evidence for Human Habitation in the Ballachulish area dating back thousands of years. Much of it has been found on the North Ballachulish side of the narrows, where standing stones, cairns, cists and carved stones have been found in addition to much smaller artefacts such as flint flakes and pottery. This all points to regular visitors by a migrating population at the very least, and quite possibly some form of longer term settlement.

The old ‘hill’fort on the summit of Cnocan Dubh on the shore at Ballachulish is believed to date from the later Iron Age, and is of a type that is uncommon in the Scottish Highlands, perhaps suggesting an outside influence over its construction.

The Ballachulish Goddess was carved c600BC and is the oldest human figure found in Scotland. It is about five feet tall, carved from Alder and has quartzite pebbles fixed as eyes. It was found about 120m from the shore of Loch Leven buried on a raised beach under thick peat. It is though that it may once have stood next to a small pool, but when found it was lying face down.

The Battle of the Laroch is a barely remembered piece of history with no formal record from the time known.

The now ruinous church on Eilean Munda in Loch Leven is believed to have been built in 1200. It served all of the communities around the Loch and the island was used as the burial ground for the MacDonalds of Glencoe and the Camerons of Callert.

The first records suggesting anything approaching a village in what we now call Ballachulish is in the early 1500s. At this time, it was probably little more than two farmsteads, one either side of the river, and named East and West Laroch.

It is, however, believed that the settlement of Brecklet, once part of the MacDonalds lands, is the oldest settlement site within modern Ballachulish.

The name Ballecheles is first recorded in 1522, as referring to a settlement to the north of the narrows. This suggests that North Ballachulish is older than South Ballachulish, but as noted above, there was settlement at Laroch (modern Ballachulish) at a similar time.

The original Ballachulish House (later burnt to the ground in 1746) is loosely dated to around 1640, although nothing of the building is known to survive.

This is the first known map of Scotland to mark Balacheules, at North Ballachulish. It also names Loch Leven, which had previously been marked as Loch Lyon or Loch Boyer. Glen Coe is also marked, although it had  been named on a map a few years earlier.

In advance of the Massacre in Glencoe, part of the instructions sent to the soldiers in the area was to ensure that the ferries across the loch were secured on the south side to prevent them being used by those fleeing from Glencoe and also be available if the soldiers should need them. This clearly shows that there were ferry boats on Loch Leven, but sadly the location is not given, so whether or not the crossing at the Ballachulish Narrows was operating at the time is unknown. The instructions may have been related to crossings between Invercoe and Callert or at Caolas nan Con.

The first Quarry opens at Ballachulish just a year after the infamous massacre of Glencoe. Quarrying started at the West Quarry in West Laroch, but later spread to the east Quarry, perhaps as early as 1694,  and then up to the Brecklet Quarries. These quarries became known as the Ballachulish Quarries, instead of the Laroch Quarries, and the name slowly took over as the name of the village. 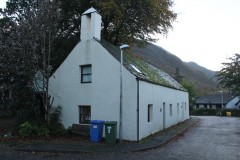 The building now known as the Old Stables in Laroch Beag is perhaps the oldest in the village. It is believed to be the same building that was used by the Episcopalian Bishop to baptise 179 local people in 1732, and was subsequently converted into an Episcopalian Church for the village, hence the small bellcote. In its time it has also served as the stables for Laroch House, at the time when it was a hotel, and has now been converted into two private houses.

The Ballachulish Ferry reportedly starts a full service across the narrows between North and South Ballachulish. These narrows are correctly called Caoloas Mhic Phadraig, or Straits of the son of Peter. However, boats had undoubtedly plied across the narrows for centuries before, albeit perhaps not offering a regular service. Other services operated across the Loch between Invercoe and Callert and at Caolas nan Con. Ferries also crossed Loch Linnhe at Corran and to the south, crossing between Lettermore / Kentallen and Inversanda.

The uprising, often called a Rebellion, of the Highlanders in support of Bonnie Prince Charlie, direct heir of the usurped King James VII saw many men from the area follow the prince south to Derby, and were then involved in the retreat to and ultimate defeat at Culloden. Both the Camerons to the north and Stewarts to the south of Loch Leven supported the Jacobites. 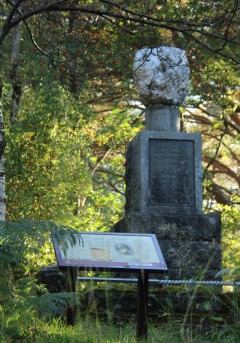 Colin Campbell of Glenure, often called the Red Fox, was killed at Lettermore on 14/5/1752. The subsequent trial is widely acknowledged as having convicted the wrong man, and so James Stewart of Appin was hung at Cnap a’Chaolais on 8/11/1752. A cairn marking the spot stands at the top of the steps on the south side of the Ballachulish Bridge.

The story was later weaved into ‘Kidnapped’ by Robert Louis Stevenson, who used Alan Breck Stewart, the more likely murderer, as one of his main characters.

The current Ballachulish House dates back to the second half of the 18th Century, following the destruction of its predecessor in 1746. The core of the building seems to have been built around 1764, with the front range added in c1800, and one wing was then demolished in 1872. Further refurbishments and improvements were made in the 1990s at which time it was a hotel, but it is now a private house once more.

Several hundred local people from across the Glencoe, Lismore and Appin and Onich parish areas were baptized at Ballachulish by Bishop Forbes.

The first Minister to be assigned to Ballachulish by the Episcopal Church was appointed in 1784. Prior to this the area had been served by itinerant priests and the Bishop as seen above. 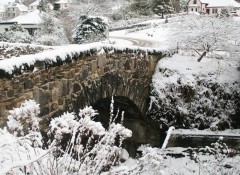 The new drove road from Fort William to Altnafeadh, Glencoe opens to provide an easier route to Caulfeild’s Military road through Kinlochleven and over the Devil’s Staircase. The new road is routed through Glen Coe to Loch Leven and then via the ferry at Ballachulish, with the old Brig O’Laroch in Ballachulish village and the Brig O’Coe in Glencoe being part of the route.

Read More: The A82 through Ballachulish on Sabre  |  Brig O’Laroch on Sabre

Compared to that undertaken 50 years later, the Statistical Account from 1791 has precious few references to Ballachulish or Laroch. It is mentioned that there is a School operated by the “Society for propagating Christian Knowledge” at the “Slate Quarry in Glenco”. This is presumably the school which is marked on later maps at the head of the east harbour, amongst the quarriers cottages.

Mention is also made to the excellent new road through Glencoe, which appears to also run around to the south through Appin to the Shian Ferry. Naturally, there is also a fairly brief reference to the “Slate Quarries of Bailechelish at Laroch in Glenco”.

Read More: Copy of Statistical Account for Lismore and Appin

Forward to the Nineteenth Century